Abby and the 7 horses

I have seven horses at my house. I *only* own six. They are all geldings, and are in their early to late teens.  Six of the seven are warmbloods; the other is 'unknown'. They range from 16.1 to 17.3. Five are bays and two are grays. Collectively they are The Boys. They are different types with clear and different characters and personalities. What they do share, though,  is a common story, of promising beginnings and great potential, high prices and some big name trainers. But  then, the oh so typical and oh so predictable soundness and behaviour issues occured that  spell the end of so many promising careers. Some of them were given to me. Some I purchased for little money, well below their value if sound and functional. All of them, and all the ones who came before, have taught me so much.

The Boys are, in no particular order, Charlie, Zeus, Phillippe, Waldo, Goose, Rheingold, and Oceano. But  I think I'll start with one that came before. His name was Bryan. 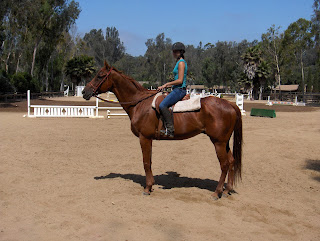 Bryan had been an Amateur jumper, and a good one. Totally honest, he would jump and jump and jump and jump...and so that's what he did. As he became less and less sound, he was sold down the proverbial road many times, till he was lucky enough to be sold to my friend Lisa. She used him as a school horse till even her big heart could see that he wasnt very usable any more. I had always been intrigued by his various..er...issues, and jumped at the chance to buy him. I mean, look at him! He was a petrie dish of unsoundnesses! I didnt often see quite so many faults, flaws, and problems, all in the same horse. How could I resist!
No comments: