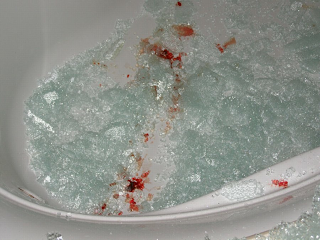 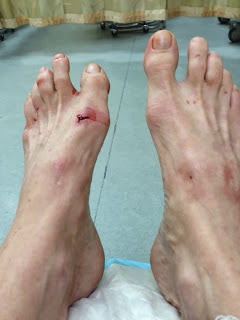 I took a picture and sent it to my husband, who is a physician. You won't believe what happened! I texted. Ruh-roh! he said, ominously. That doesn't look good. What's the matter? I texted. I think you have damaged your tendon, he texted back. Hmm. Maybe he was right. My left foot certainly didn't look as perky as the right one. Hmmm.
And he was right. The ER Dr dug around and said a medical version of 'You are in deep doo-doo, Missy!'. I had indeed severed that big tendon that goes across the top of your foot. At the time I didn't realize what that exactly meant. I do now, 8 months later, and it was no fun.
The first repair surgery failed, thanks to an inept orthopedist who cheerfully told me 'I have never done one of these before!' (Note to self: bring Gray's Anatomy to any future surgeon and ask him to identify relevant body parts before surgery). The second surgery, in February, entailed a tendon graft and a much longer, very painful layup and recovery. I was non-weight bearing for three months. It was really miserable.
I had had a dear friend come for a visit for a week or two; she was here when I got hurt. Bless her, she stayed all winter and took care of my horses, fed the dogs and the chickens, and brought me soup and cereal for the weeks I was bed bound. I wrote before about how certain friends don't ask you what you need or if you need help; they just see a need and fill it.  Hunter is that kind of friend. An experienced horse girl, she blanketed and mucked and fed the two boys I have at home for five months. My daughter came for two weeks as well and then on weekends. It is very hard for me to be dependent on other people. Emma and Hunter took such good care of me and Hunter kept me laughing rather than crying, which is certainly what I felt  like doing.
So that's how the year started! And it just got better! >:-> Not.
4 comments: