So, there I was, lame and in a boot. My first surgery was pretty easy and the recovery at first appeared like a piece of cake. I was pretty medicated and miserable (I will never understand how some people can take narcotics recreationally! Man, they make me sick, depressed, and play havoc with my memory. I couldn't wait to get off of them) but it wasn't so bad. I had the surgery on a Monday. The Dr. told me I could weight bear, drive, whatever, and sent me home, no crutches, and in a walking boot. So I took him at his word and limped around. It was my left foot so I could drive with no problem.

As luck would have it, the yearly local George clinic was being held that week. I was not feeling too hot but couldn't bear the thought of missing it. It was cold and dreary and I was spacey and medicated but it was only ten minutes from my house, so that Friday, off I went. 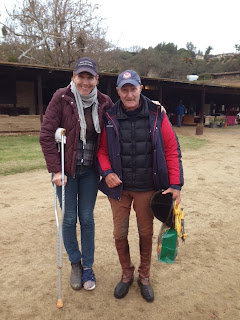 ﻿
As usual, it was great. I love The George. He was his usual pointed, acerbic self, sitting like the Grand Poobah in his golf cart, dispensing salient advice and criticisms as is his wont. It is such a privilege to be able to audit that clinic every year. It's held at Fairbrook Farm, Julie Taylor Zumstein's beautiful farm in Fallbrook CA. I hobbled in from the parking lot, propped my foot up on the bleachers, and watched and listened. My foot throbbed. It was worth every minute.

There were some excellent riders and some that maybe should not have been there. It had been raining, so the grass field was wet. There were no falls though; Julies grass field drains well and is pretty good even in the rain. The best part of a George clinic, to me, is watching and studying the combinations he puts the riders over, and how the riders negotiate them. I have been auditing that clinic for several years now and never miss it. Every year I vow to ride in it, and every year something happens and I can't. I won't make it this year, either, since the horses I could have used were the horses I lost this year. Oh well. George doesn't seem to want to retire and maybe I will get to ride in that clinic before we both hang it up.

I wrote about my big dear 'giant white donkey', Zeus and his weird falling episodes that led to his euthanasia. Sadly, as it turned out, he was just the first in what became Another Winter of Loss. I say another; a few years ago it seemed like everything I loved died. My mom, my brother, several horses, even my dogs. I didn't think I could ever endure a year like that again. But fate doesn't always ask you what you want to bear, or think you can bear. It just gives it to you, regardless. And so it did.